The Science to Achieve Any Goal in Life

We have Bread, but no Health; we have Land, but no Freedom; we have "Peace," but no Truth. For Truth, Freedom and Health, we need Revolution. And, Revolution occurs when you set your goals for your life and understand what it takes to achieve those goals. This book will give you the practical understanding of the scientific principles of all systems to know the science to achieve any goal. Dr. V.A. Shiva Ayyadurai

The fundamental Principles of All Systems, be it your Body, your Business, or the World. Learn the principles of systems so you can learn the science to achieve any goal in life.

Your Body, Your System

How the body is a system, and how you can achieve real health and well-being, unique to you, by learning how your body works as a system. You will be provided an amazing tool to understand the scientific principles by using Your Body, as a System. Health and well-being will be a result, but you will learn much more about how to affect any system to get the goals you, your family and your community desire.

Your body is a system and all systems have a particular state in which they function optimally. The forces of Transport, Conversion and Structure affect all forms of Matter, Energy and Information throughout nature. Learn how to get to your natural system state making constant adjustments until you achieve your goal.

The military-industrial-academic complex has promoted and positioned itself as the source of innovation. Innovation that occurs outside this center is anathema to their narrative and these innovations are actively suppressed, discredited or ridiculed because it questions and subverts the dearly held, profit-based myth of how innovation takes place, where it happens, and (most importantly) what kind of people are responsible for it.

Danger arises when political power is confined to a small core with a minority controlling it. The idea that power actually lies at the periphery is unacceptable in this model. Using systems theory, it is possible to build a society where the periphery gets what is due resulting in equality of political power. 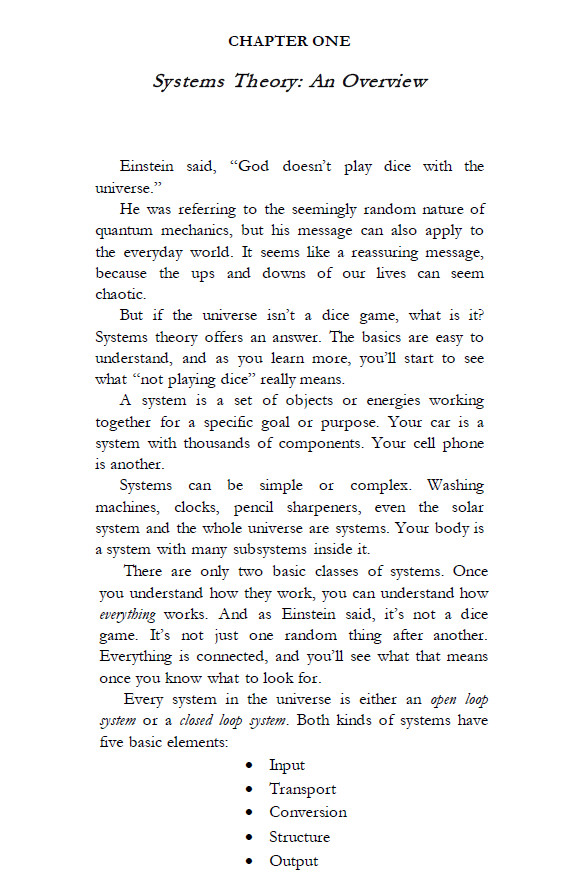 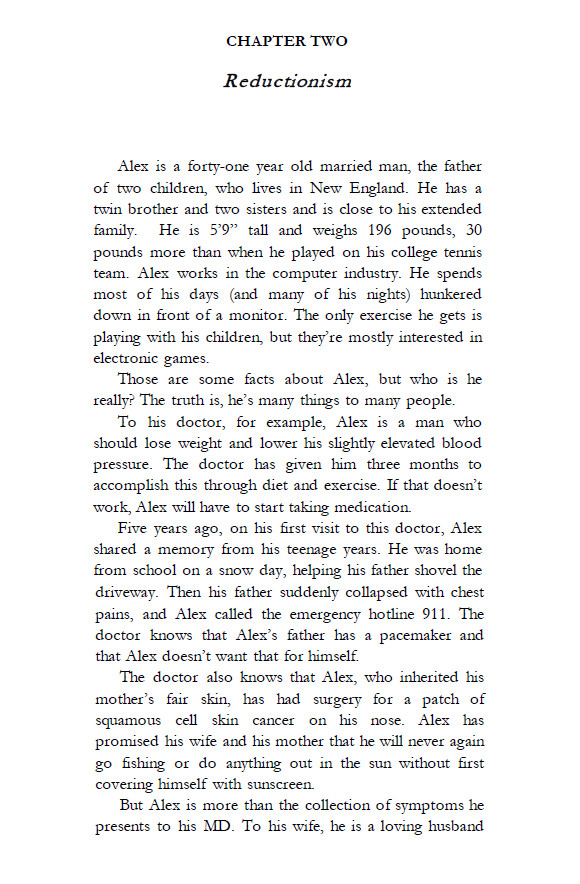 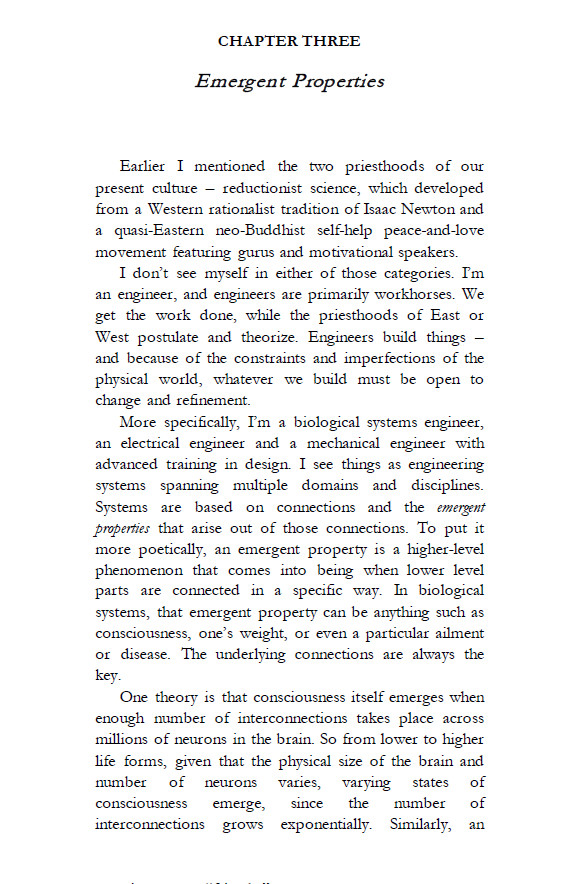 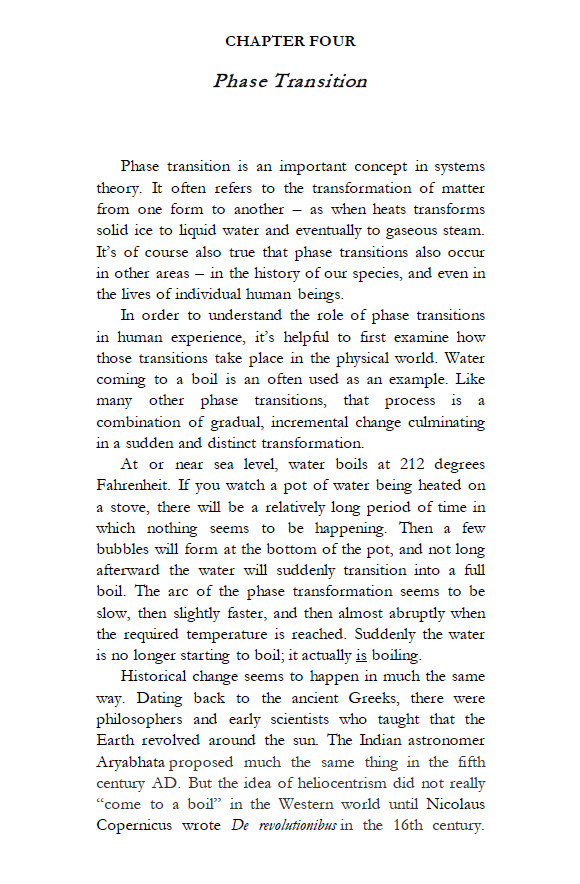 The book is based on a scientific and systems theoretic understanding. Dr. V.A. Shiva Ayyadurai’s work at MIT and as a part of his Fulbright research on Siddha and Systems Biology resulted in recognizing the correlation between the lingua franca used in traditional systems of medicine and modern control systems engineering. Please click on the image below to read Dr. Ayyadurai's paper. 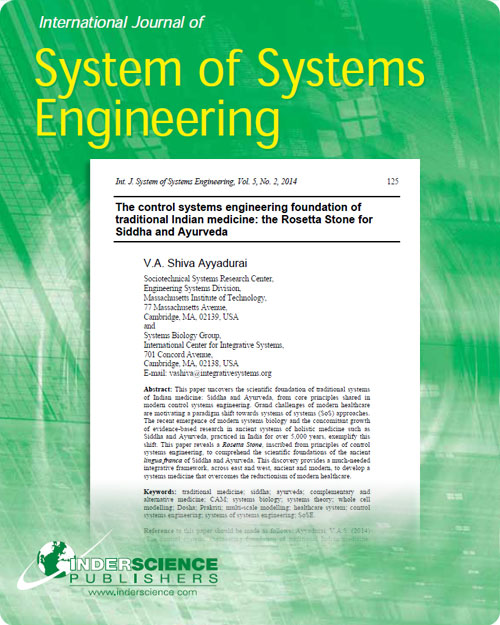 We at IJSSE are honored to bring this incredible work to the world of systems and medicine. This work demonstrates the power of a systems engineering approach to reveal the invariance of foundational engineering principles, across both cultural and temporal scales spanning 5,000 years.

This discovery is not based on a reductionist medical approach but on an engineering systems approach, and conclusively ends the age-old debate on whether Ayurveda and Siddha have scientific integrity. This ‘Rosetta Stone’ provides a much-needed gateway across east and west, ancient and modern, science and tradition, to illuminate western scientists and the modern world to the scientific foundation of Siddha and Ayurveda.

This is a seminal paper that unequivocally proves the scientific basis of Ayurveda and Siddha. The research demonstrates that the ancient scientists of India, over 5,000 years ago, independent of the Western world, discovered principles of systems science, the underpinnings of Ayurveda and Siddha as well as the underpinnings of modern systems engineering principles (which were defined by the West in the 1930s) that govern modern technologies from the thermostat to the spacecraft, as well as the functioning of the human body.

With great clarity, this paper reveals a direct one-to-one correlation between the terminology used by the ancient Rishis and Sages of India to describe Ayurveda and Siddha and the principles of western systems science. This discovery demonstrates the true genius of Ayurveda and Siddha.

The regular workshop fee is $1250.00. You will be eligible to receive a full scholarship based on review by our Educational Committee.

Dr. V.A. Shiva Ayyadurai, the inventor of email and polymath, holds four degrees from MIT, is a world-renowned systems scientist, inventor and entrepreneur. He is a Fulbright Scholar, Lemelson-MIT Awards Finalist, India’s First Outstanding Scientist and Technologist of Indian Origin, Westinghouse Science Talent Honors Award recipient, and a nominee for the U.S. National Medal of Technology and Innovation. His love of medicine and complex systems began in India when he became intrigued with medicine at the age of five as he observed his grandmother, a farmer and healer in the small village of Muhavur in South India, apply Siddha, India’s oldest system of traditional medicine, to heal and support local villagers. These early experiences inspired him to pursue the study of modern systems science, information technology and eastern and traditional systems of medicine to develop an integrative framework linking eastern and western systems of medicine.

In 1978, as a precocious 14-year-old, after completing a special program in computer science at the Courant Institute of Mathematical Science at NYU, Ayyadurai was recruited by the University of Medicine and Dentistry of New Jersey (UMDNJ) as a Research Fellow, where he developed the first electronic emulation of the entire interoffice mail system (Inbox, Outbox, Folders, Address Book, Memo, etc.), which he named “EMAIL,” to invent the world’s first email system, resulting in him being awarded the first United States Copyright for Email, Computer Program for Electronic Mail System, at a time when Copyright was the only protection for software inventions.

Ayyadurai went on to receive four degrees from MIT, including a bachelors in electrical engineering and computer science, and a dual master’s degree in mechanical engineering and visual studies from the MIT Media Laboratory. In 2003, he returned to MIT to complete his doctoral work in systems biology within the Department of Biological Engineering, where he developed CytoSolve®, a scalable computational platform for modeling the cell by dynamic integration of molecular pathways models. Following his doctoral work, he returned to India on a Fulbright, where he discovered the systems theoretic basis of eastern systems of medicine, resulting in Systems Health®, a new educational program that provides a scientific foundation of integrative medicine. While at MIT, he also developed a pioneering new course called Systems Visualization which integrates systems theory, narrative story telling, metaphor and data visualization to provide visualization of complex systems.

Today, he is the Chairman & CEO of CytoSolve, Inc. CytoSolve provides a revolutionary platform for modeling complex diseases as well as for discovering multi-combination therapeutics. His recent efforts at CytoSolve have led to an FDA allowance and exemption for a multi-combination drug for pancreatic cancer, development of innovative nutraceutical products, as well as numerous industry and academic partnerships. Ayyadurai’s earlier research on pattern recognition and large-scale systems development also resulted in multiple patents, numerous industry awards, commercial products such as EchoMail, and scientific and industry publications. He serves as Executive Director of the International Center for Integrative Systems (ICIS), a non-profit research and education foundation, located in Cambridge.

He has started and successfully several start-up companies. Following his winning of a White House competition to automatically analyze and sort mail President Clinton’s email, Ayyadurai started EchoMail, Inc. which grew to nearly $200 million in market valuation. He has appeared in The MIT Technology Review, The Wall Street Journal, New York Times, NBC News, USA Today and other major media. Shiva was named Top 40 in the Improper Bostonian. He has also authored four books on the Internet and EMAIL: Arts and the Internet, The Internet Publicity Guide, The Email Revolution, and Systems Health which will be coming out in 2015. Ayyadurai continues his passion for entrepreneurialism as Managing Director of General Interactive, a venture fund that incubates, mentors and funds new startups in various areas including rural healthcare, media, biotechnology, information technology, to name a few. He has also started Innovation Corps to fuel innovation among teenagers worldwide. He serves as a consultant to CEOs and Executive Management at Fortune 1000 companies, as well as government organizations such as the United States Postal Service, Office of Inspector General.

Ayyadurai is a member of Sigma-Xi, Eta Kappa Nu and Tau Beta Pi. He supports the Shanthi Foundation, which raises money to provide scholarships for education of orphaned girls. He is also a supporter of various arts and non-profit organizations including the Guggenheim Museum, Very Special Arts, National Public Radio and the National Geographic Society. Ayyadurai lives in Belmont, Massachusetts and enjoys yoga, tennis, animals, art and architecture. He also enjoys traveling with actress Fran Drescher with whom he held a spiritual ceremony on September 7, 2014 to celebrate their growing friendship.